Brain Therapy Clinic is proud to announce that we have a new piece of brain mapping technology in the Clinic. Over the past few months, the QEEG has been put to work detecting the areas in the brain that were affected by the injury.  Many people have asked us, what is a QEEG? how does it work? how can it help? what are amplitude levels?… But don’t worry, we have all the answers for you.

We will cover the most asked questions about the QEEG machine.

QEEG is short for quantitative electroencephalograms, it maps, records and indicates where brain activity has higher or lower amplitude levels. Using this data, it becomes easier to pinpoint the strengths and weaknesses after suffering a brain injury and help bring the amplitude levels back to normal. 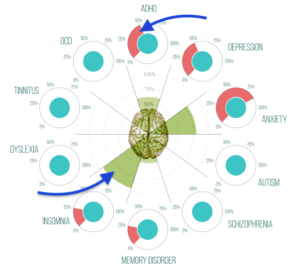 First, patients are asked a series of questions regarding the issues that they have been noticing or experiencing after the brain injury has occurred. For some patients, they have trouble sleeping, having trouble remembering things and high levels of anxiety. The recorded data indicated by the red on the graph and is compared after the QEEG testing is complete. The QEEG uses a multi-electrode cap to record and present the data in a coloured brain map showing specifically the areas where the amplitude levels are higher or lower than average shown here by the green.

The QEEG has detected a higher level of insomnia and anxiety based on brain activity during testing. Once the testing is complete, a TBI Action Plan and neurofeedback training plan will target the areas in the brain that is experiencing higher or lower amplitude levels.

How does it work?

In order to help your brain heal, you need to know what areas of the brain are affected the most. 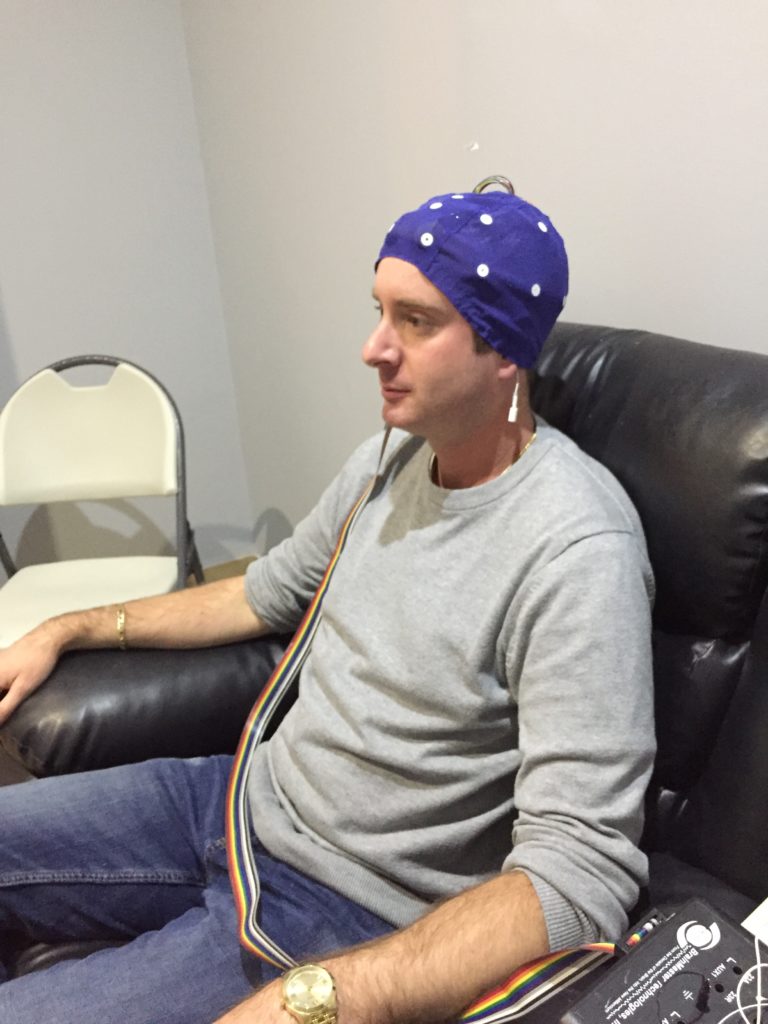 After the initial QEEG testing and report, you can now begin to start your TBI Action Plan with neurofeedback.

The neurofeedback helps train the brain and help bring back normal amplitude levels, this process takes about 10-20 minutes each session.

The QEEG is the beginning of the healing process and the start if making a TBI Action Plan to help you get back to your daily life.

How does it help?

Brain injuries are common, however, they are not always easiest to treat. When a brain injury has occurred the sensories in your brain that indicate where some abnormalities are. For example, the excess Theta and Alpha, as well as deviant Beta power, have been associated with ADHD. The excess Delta power has been associated with traumatic brain injuries and memory disorder. These high levels can also explain and be related to sleep, anxiety and attention issues.

Using the QEEG machine, we can better pinpoint areas in the brain where it is producing higher or lower levels of Theta, Alpha, Beta and Delta and create a TBI Action Plan. The TBI Action Plan is a plan created for specific areas that are producing higher or lower levels, this would result in counteract the levels and help them return to normal levels.

What are amplitude levels?

The amplitude of Delta activity was high at central electrode sites. High Delta power is associated with impaired memory and traumatic brain injuries. Delta is dominant during deep sleep and is associated with low arousal during wakefulness.

The amplitude of Theta activity was high at central sites. 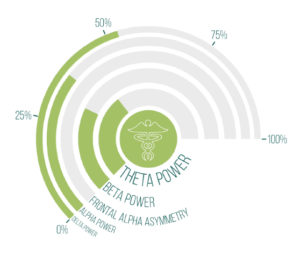 The most reliable EEG biomarker for attentional disorders is the presence of excessive front-central. Theta power, reflecting a hypo-arousal in those areas resulting in sub-optimal functioning of brain areas that are important for the regulation of attention and emotions, impulse control and planning.

Slow Beta activity on central brain areas is called ‘Sensory-Motor Rythm’ (SMR). Spindling SMR activity during sleep is important for deep sleep. Its role is to inhibit motor output excessive SMR during wakefulness can be a sign of hypo-arousal and impaired vigilance regulation and has been associated with attentional disorders. 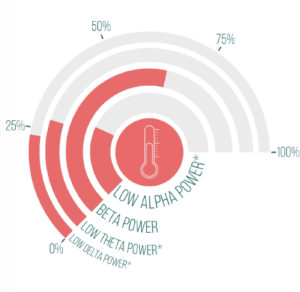 The patient showed high Beta activity at frontal sites.
A deficit in Beta activity has been linked with attentional disorders and often coincides with high Theta power. However, about 15% of the patients with attentional disorders will show excessive Beta. Excessive Beta amplitudes are associated with hyperarousal and can be also associated with anxiety disorder and insomnia. Beta amplitudes are very susceptible to muscle artifacts: Excessive Beta in frontal, temporal and occipital Beta can be caused by tension in the forehead (e.g. frowning or raised eyebrows), jaw muscles and neck muscles, respectively.

Do you know the signs of a concussion? click here to learn more!

Brain Therapy Clinic
5.0
Based on 18 reviews
powered by Facebook

Barb Philp
2020-02-17T20:16:03+0000
I have suffered with a form of Muscular Dystrophy for most of my life. I met Doctor Horseman’s team when l returned... to Peterborough. I suffered a neck injury in a MVA. (accident). Ian did a thorough history and assessment initially which included X-ray. My neck and lumbar sacral regions are especially vulnerable due to my gait. Ian has treated me for seventeen years and l only require maintenance and preventative strategies to maintain a much healthier lifestyle I am so grateful to have the care Doctor Horseman provides for me Peterborough is fortunate to have such a progressive chiropractor Thanks Barb Collins Philpread more

Julie Bureau
2019-09-22T12:55:42+0000
I had a concussion 16 months ago , Dr Horseman and staff have given me so much relief . They are so kind and... compassionate , making Everything about the patients needs .. Dr Horseman fully understands how I’m feeling with having a severe TBI himself . I feel like I have my life back already and it’s only been 5 visits . They have set me up on a plan for full recovery and I couldn’t be feeling more blessed than I am With this clinic ! Finally a place where people heal that’s honest and more than fair !! Thank you for your patients knowledge and support. 🙏 🙌read more

Sabine Quast
2019-09-21T14:23:31+0000
Thank you Dr. Horseman and your excellent team ! Before I was your client I was always in severe pain and had great... difficulty with my mobolity due to untreated childhood scoliosis. Dr. Horseman and crew created a treatment plan specialized specifically for me and in just 6 months has greatly improved my quality of life . I am now able to walk with minimal pain and can do things I used to avoid because it was too painful . My treatment also included techniques to improve my terrible posture......people have noticed the improvement . I was skeptical in the beginning but Dr. Horseman has turned me into a believer . I thought I was destined to a life of pain and discomfort .....I couldn't have been more wrong. Thanks again Dr. Horseman and your excellent team ! I couldn't have found a more professional clinic with such a compassionate staff . One more thing.......I look forward to my visits as your clinic has an easy going atmosphere. Always a giggle to be had . In my world you guys are ROCK STARS !!read more

Evelene Brown
2019-06-25T01:05:33+0000
dr Ian and his professional staff put me on the road to "living life" many years ago! no words can express my... gratitude for their constant care and professionalism!read more

Diane Martin
2019-05-31T03:25:40+0000
They don't treat you as a dollar sign, they listen to your concerns, and always answer any questions about you and your... treatment. They help keep me positive on days when I want to give up! I will miss them when I'm finally healthy!read more

Heather Yvonne Zahn
2018-03-08T16:01:01+0000
After seeing dozens of neurologists, specialists, doctors, chiropractors and being on every medication possible I still... was never told what exactly was wrong with me, and then I came here and after one visit he knew what to do and put a plan in motion for me. After only a few months I have noticed a difference and couldn’t be more thankful for all the staff here. They treat me amazing and always make me comfortable and smile when i’m here. I LOVE the posture clinic and highly recommend it to everyone!!read more

Trish Cook
2017-02-09T21:53:44+0000
I have always been leery of chiropractors but Dr. Ian Horseman took all those concerns away! What an amazing place to... go where they WILL help you and do it with kindness while listening to what you tell them. Hats off to the whole staff, especially Linda and Mo, and of course Ian. Trish Cooperread more

France Tremblay
2016-02-20T14:44:24+0000
I've been helped twice by this amazing clinic. If you are out of hope of ever being pain free ..... Check Ian... out! He's a very wise, caring practitioner of many alternative treatments that actually work.read more

Tammy Young
2015-05-26T00:25:48+0000
Dr Horseman and his staff are fantastic. They have given me back my life when everyone else told me that I would have... to learn to live with the pain!! I cannot thank them enough! I would (and have) recomend them highly\\1read more
Next Reviews
Go to Top